Ceilings to create a healthier workplace 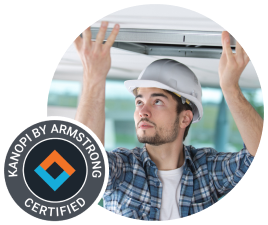 Tell us about your commercial or residential project for a free quote and let us do the rest.

✓  Managed around your schedule

GET A FREE QUOTE

GET A FREE QUOTE 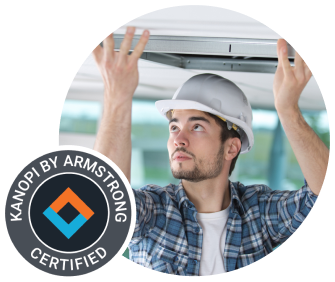 Have questions? We’re here to help

Our customer service can answer any of your ceiling questions.

We will get back to you within 2 business days.

Give us a call

We’re here to help you create the space of your dreams.

Back to all articles

Drop ceiling vs drywall ceiling: Which is better?

When picking the type of ceiling you want for your business, home, or anything in between, oftentimes the choices are between a drop ceiling or a drywall ceiling.

Ceilings aren't a small area that you can hide if you decide you don't like them. They can have an enormous impact on a room.

The most common type of ceiling in commercial spaces is the dropped ceiling, which is suspended from structural elements above. Other types of ceilings are ones that have panels of drywall fastened either directly to the ceiling joists or to a few layers of moisture-proof plywood which are then attached to the joists. Pipework or ducts can be run in the gap above the ceiling, and insulation and fireproofing material can be placed here.

What are the differences between drop ceilings and drywall ceilings?

There are some key differences between drywall and suspended ceiling, which you need to take into consideration if you are looking to upgrade the ceilings in your home: • A suspended ceiling is used to hide unsightly wiring or pipework as well as provide easy access to anything above.
• With a choice of suspended ceiling kits or individual components, a dropped ceiling can be installed by professionals or advanced DIY'ers.
• Drop ceilings from Kanopi are available in many different panel styles and colors, giving you the ability to customize your look. The ceiling panels can also be replaced without having to dismantle the ceiling frame.
• There is a minimum height requirement of 3 inches for a dropped ceiling, so they are not suitable for all rooms. • A drywall ceiling comes in panels and can be used instead of full ceiling plaster.
• The panels are attached to your existing ceiling joists to create a flat and simple surface.
• Each drywall panel weighs around 60 pounds, so it requires at least two people to lift into place.
• You will need to cut out holes for ceiling lights and vents.
• Once hung, a drywall ceiling will require finishing – including sanding, painting, and filling to create the smooth ceiling look.


Which is better: drywall ceilings or drop ceilings?

When it comes to installing drywall or dropped ceiling, it's much easier to install a dropped ceiling than a drywall ceiling. Installing a drop ceiling is less messy than installing a drywall ceiling and a relatively quick project. Drywall requires at least two people, drywall sheets are heavy, and once you've installed them, you will still need to do additional work to finish them. They will need to be sanded, cleaned, and painted.
Advantage: Drop ceilings

Acoustical drop ceilings can help provide soundproofing in two different ways: either by absorbing sound, preventing sound from bouncing around the room, or by blocking sound from traveling to an adjacent room. Some acoustical drop ceilings have both capabilities, while some have one or the other. When choosing acoustical ceiling tiles or panels, you'll want to look at two ratings: Noise Reduction Coefficient (NRC) and Ceiling Attenuation Class (CAC). NRC tells you how much sound a ceiling panel will absorb to lessen noise within a room. CAC rates a ceiling's efficiency to block sound to adjacent rooms.
Advantage: Drop ceilings

This will be the deciding factor for a lot of people. Dropped ceilings have a bad reputation for their ugly appearance. Most think of the ugly "worm hole" tiles that are used for school ceilings. However, those tiles are not the only drop ceiling option. Today, there are a variety of styles (smooth, textured, decorative, tin, wood, and metal), sizes (2x2, 2x4, planks), and colors (white, black, brown, tan, copper, and more). With all of those options, drop ceilings are a great way to amp up a space that reflects your style. Drywall ceilings can only be painted. There isn't a lot of variety when it comes to the decorative side of drywall. If a traditional, simple coat of paint is all you are looking for because you'll have visual focal points elsewhere in the room, then drywall is a good option.
Advantage: Neither

Whether we are talking about maintenance of the actual ceiling itself or the maintenance of other items in your space, drop ceilings provide the ability to be flexible. The maintenance of ceiling tiles is easy. If there are knicks, scrapes, water damage, or dirt, you can simply swap out one or a few ceiling tiles and transform the space. With drywall ceilings, if there are knicks, scrapes, or water damage, it requires major updating with cutting, taping, sanding, and re-painting. Another maintenance element to keep in mind is the ability to access above the ceiling for wiring, plumbing, ductwork, etc. With drop ceilings, move one or two tiles and you have access. For drywall, you either need an access door on part of the ceiling or you would need to go from the floor above. If neither of those are an option, cutting through the drywall would need done to fix whatever issue is happening above the ceiling.
Advantage: Drop ceilings

It's a clean sweep for the drop ceiling! From installation, to sound control, to maintenance, a drop ceiling is the better option when compared to drywall. A white drywall ceiling has no style or impact. It's flat, plain, and boring. If you're planning a complete room renovation, think about your ceiling as the "fifth wall" in your room.

With our wide array of products, a drop ceiling isn't the only option. You can also choose to go with a surface mount ceiling. Surface mount ceilings and planks maximize headroom and create interest overhead by attaching directly to the deck above, either as a uniform ceiling, which is great for covering an old ceiling that is either damaged, dated, or dull. Surface mount ceilings are also a great option to use as acoustical accents that improve the noise in a space, while also maintaining the open feel and industrial look.

Contact the experts at Kanopi today to choose the best look ceiling for your project.

Ideas for covering ...
Covering an old ceiling may sound like an impossible task, but...
Read more

Qualifying business are able to claim tax exempt status on orders through Kanopi by Armstrong. Simply follow these steps: